skip to main | skip to sidebar

PLANNING, CONSTRUCTION AND OPERATION OF MY 1/48 SCALE RAILROAD

This time we'll look at a beverage company that receives tank cars of corn syrup.
The track layout is very simple. 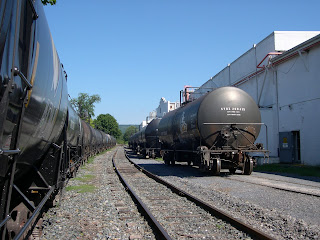 Here we are looking north.  The middle track is the main.  To the left (west) is the appropriately named "west siding".  This double-ended siding serves as a storage track for loaded cars and can hold about 26 tanks.  The track on the right (east) is where tanks are actually spotted for unloading.  This track is also a double ended siding (switches at both ends).

The east siding has three spots where tank cars are actually unloaded.  There is room to store six more cars between the unloading spots and the north switch.

The cars show up at the interchange in spurts.  One week will see four or five cars arrive; the next week twenty will come in.  It all depends on the ebb and flow of the plant's ordering process.  Tanks are taken up the line based on tonnage, i.e. how many cars the locomotives can pull up the grades, factoring in such things as snow, leaves, wet rail etc.
Like water flowing to the sea, all tanks eventually make their way from the interchange to the west siding at the plant.  Crews try to keep cars on the west siding lined up in date order...with older cars at the north end and newer cars to the south..but this is not always possible.

The track here is on a grade. On a good day, the locomotives can pull a dozen or so tanks out the north end of the west siding.  Remember this track holds just under thirty cars, so digging out the oldest cars can make for some interesting switching.  For instance, sometimes the oldest cars will be on the south end of the siding, buried behind a dozen newer cars.  The simple move would be to pull everything out of the siding, set out the old cars on the main, then place the newer cars back into the siding.  The problem is, the locomotives can't pull all those cars out of the siding.  So instead, the block of old cars is shoved out the south end switch onto the main, the locomotives will then pull the remaining cars back into the siding, cut off, go out the north end of the siding, then back down the main to couple on to the cut.  See what I mean about interesting moves?


It's not unheard of for the local to shove tanks ahead of the locomotive from the previous town, so that day's newer cars can be placed on the siding from the south switch.  This avoids having to pull too many cars uphill out of the north end when getting them in order.   All of this would make for interesting scenarios on a model railroad, keeping crews busy and on their toes.
When a crew arrives at the plant, they check a mailbox located near the east siding.  In the box will be paperwork telling the conductor which cars are empty.  It could be one, two or all three cars.  After pulling chocks and making sure all steam hoses are disconnected, a conductor will couple all the cars together. 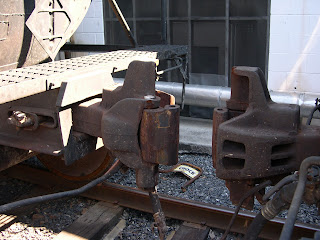 Cars on spot are separated by about five feet, sometimes less, depending on how the car's manway lines up with the walkway platform.  Once coupled, the cars  are shoved down to the south end of the siding.  The empties are set out here for pickup later in the day when the crew comes back south through town.  Once the empties are set-off, the crew pulls north again to respot/spot the loaded cars. 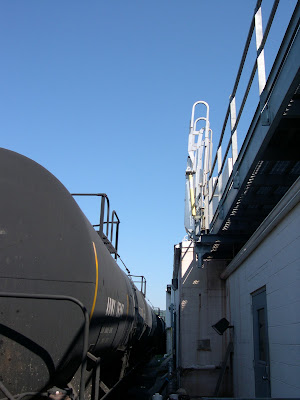 Views of the gangways at the unloading spots. 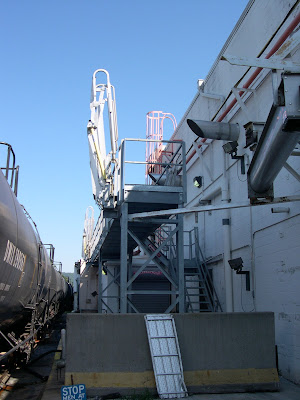 The plant always unloads the three spotted cars from south to north.  So say two cars are empty and the northern-most car is not yet fully unloaded.  The crew shoves everything down to the south end of the siding, drops the two empties, then pulls back north with the partial load and it becomes the new southern-most car.  Two new cars are then spotted for unloading above it.

Remember that the east track can hold nine cars total: three on spot and six more stored above them.  After several days, all nine of those cars will be unloaded and the crew brings another block over from the west siding.  And so it goes.

The steam unloading facility is quite simple and would be easy to model. 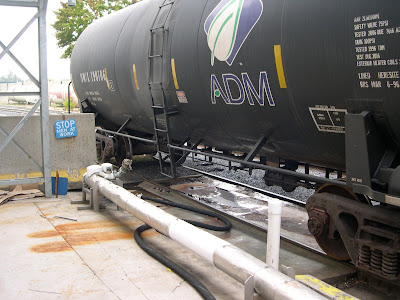 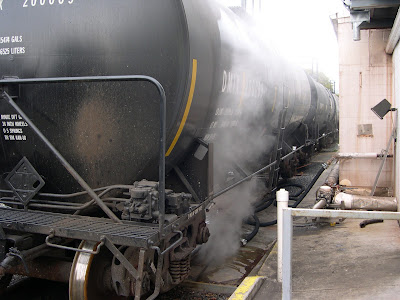 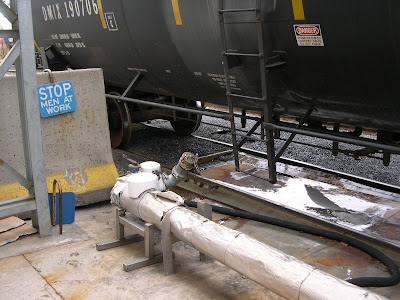 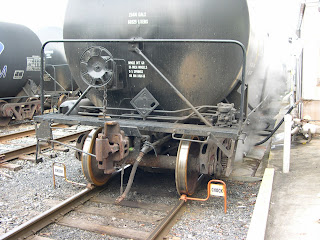 When switching is completed, plant personnel replace their blue flags and reattach the steam lines. 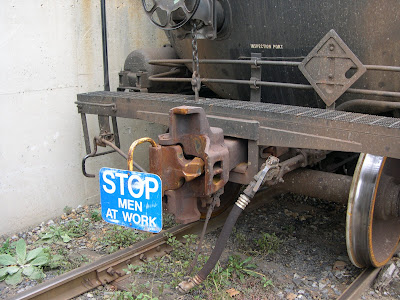